All-in-one desktop PCs have long been touted as space-saving wonders, squeezing an entire computer into a frame that's only slightly bigger than the monitor itself. They've also represented some of the computer industry's best bargains, typically selling for about one-third less than a standard desktop PC with a separate monitor. But did you know they can cut your electricity bill significantly compared with a traditional desktop system?

All-in-one PCs are stingy on electricity consumption because many of their parts have a laptop lineage. Some models use notebook-style external AC adapters, low-power processors, and downsized hard drives and DVD drives, all of which use less electricity than traditional desktop components.

Lower energy use means a slashed electricity bill and smaller amounts of greenhouse gases pumped from power plants into the atmosphere. No surprise, then, that some all-in-one manufacturers are marketing the green aspects of their products with phrases such as "achieving the perfect balance between efficiency and power usage."

I decided to put these claims to the test with four of the newest power-saving systems.

Since saving money on electricity bills doesn't do you much good if you paid a lot for the computer in the first place, I looked at four models that cost $US600 or less: the Acer Veriton Z280G, the Averatec D1133, the HP Pavilion MS214 and the MSI Wind Top AE1900. All have approximately 18.5-in. screens and are Energy Star 5.0 certified by the U.S. Department of Energy. While Averatec doesn't actively tout its all-in-one's low energy use like the other manufacturers do, the company readily agreed to be graded on energy consumption for this roundup.

To my delight, I found that all the models I tested consumed about one-quarter to one-third of the 160 watts used by a typical desktop PC and stand-alone monitor, including my Dell Dimension 8500 and other desktop PCs I've tested. The savings add up quickly and could keep as much as $US60 a year in your pocket. (See "How I tested" and the performance results chart for details.) Of course, all-in-one desktops still use about twice as much electricity as a typical laptop, but you're getting a comfortably large screen and a more ergonomic setup in the bargain.

Of course, a low price tag and low energy use inevitably bring some compromises, which means you can forget about luxuries like a high-performance processor, lots of RAM or a Blu-ray drive. The MSI AE1900, for instance, comes with just 1GB of RAM and it can't be upgraded. Clearly, these are meant to be basic PCs that perform on par with a netbook. (The term "net-top" is sometimes bandied about to indicate the desktop equivalent of a netbook.)

But if your computing needs are modest, all-in-ones are well worth a look for the savings they can bring, both at the time of purchase and throughout the years. Keep reading to find out which model struck the best balance among price, performance and power use.

If power bills were all that mattered in choosing an all-in-one PC, I'd run out right now, buy an Acer Veriton Z280G and laugh all the way to the bank. But although it consumed the least amount of power of the group, its performance came up short.

The monitor case houses the entire system, including the 1.6-GHz Intel Atom N270 processor, 2GB of RAM, a 160GB hard drive and a Super Multi DVD drive. There's a big power switch up front, and the brightness control on the side is convenient but has only five settings to choose from.

The Z280G's 18.5-in. display is the brightest of the four but lacks the touch capabilities of the MSI AE1900. Its 1366-by-768 native resolution matches that of the HP and MSI models but is bested by the Averatec's 1680-by-945 resolution. The Z280G's Intel GMA 950 graphics engine with 128MB of video memory is on par with the MSI all-in-one's but well behind the Averatec and HP models'. While all the others have built-in webcams, the Z280G does without.

When it comes to ports, the Z280G has an oddity: There are two antiquated PS/2 ports for the (included) keyboard and mouse. There are also five USB ports, headphone and microphone jacks, and a flash card reader. Like the others in the roundup, it has wired and wireless (802.11b/g Wi-Fi) networking but lacks the DVI and SATA ports of the Averatec.

The Z280G uses only 37 watts at full power and a downright tightfisted 1 watt -- half as much as the others -- when asleep. It adds up to an annual power bill of just $US20, about $US7 less per year than the Averatec.

What's sacrificed is performance, with the system getting only a 263.8 on the PassMark Performance benchmark, which is below par even for a netbook and nearly 20 per cent off the pace set by the HP MS214. As was the case with the MSI AE1900, which had similar hardware, the Z280G yielded choppy video when running Trainz, although it delivered more background details than the MSI model.

Like the AE1900, the Z280G uses Windows XP, but Acer opted for the Professional version of the operating system. The installed software includes some goodies such as Carbonite's online backup service and an online set of games called Wild Games.

All told, the Z280G defines "economical," and it rivals many laptops in power use. On the other hand, its performance leaves me wanting more. 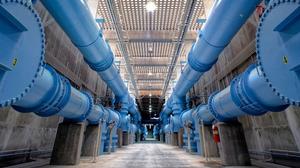