The decision to not conduct proceedings into 5G Network’s (5GN) acquisition of Webcentral under claims of “coercion” has been affirmed by the Australian Takeovers Panel after it declined to review its initial decision.

The review was focused on the decision of an application made by financial services firm Keybridge Capital to the Takeovers Panel, which flagged several issues with the publicly-listed data infrastructure and network services provider's proposed acquisition in late October.

The Panel declined to conduct proceedings a week later under the consideration that it was not in the public interest, which was followed the next day by an application from Keybridge to review that initial decision.

The outcome saw the review Panel agreeing with the initial Panel that it was conceivable that Webcentral shareholders were coerced into accepting the 5G Networks bid prior to it waiving a 50 per cent acceptance condition, particularly during the period after 5G Networks declared its bid free of conditions.

“However, the review Panel considered it unlikely it would find any coercion relating to the 50 per cent acceptance condition in the 5GN funding unacceptable in light of other factors that may have influenced acceptances into the 5GN bid at the time," a statement from the Takeovers Panel noted.

“The review Panel also considered it unlikely that it would second guess the decision of the Webcentral directors to recommend the 5GN bid and provide intention statements to accept the 5GN bid in the circumstances.

“The review Panel concluded there was no reasonable prospect that it would make a declaration of unacceptable circumstances, affirming the initial Panel’s decision not to conduct proceedings.”

The alleged issues raised by Keybridge focused on 5GN’s bidder's statement and Webcentral's target's statement in relation to the 5G Networks Conditional Funding, with the financial services firm claiming in late October that it created "a highly coercive effect on shareholders to accept the [5G Networks] bid, to cause control to pass in a manner inconsistent with that of an efficient, competitive and informed market".

Keybridge also claimed the statements made by the Webcentral directors — that they would accept the 5GN bid — were anti-competitive and contravened section 606 of the Corporations Act 2001.

The declined review application comes a month after 5GN boss Joe Demase’s took over Webcentral’s leadership ahead of its proposed acquisition, acting as its interim CEO in place of Brett Fenton.

Fenton took over from another interim CEO Tristan Sternson, who stepped in after former leader Martin Mercer exited what was then known as Arq Group in September 2019.

5GN was previously up against US company Web.com Group in its pursuit of Webcentral, as the latter raised its bid to $18.9 million last month. However, 5GN won the tussle with a higher offer of $21.6 million. 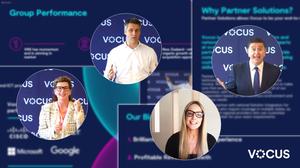