Cortex, who had developed the back-end technology for TheSpot's health and beauty retail sites, has now signed a $1 million agreement with DJs to develop its new e-commerce suite.

While the site will maintain a strictly DJs-branded look and feel, it will model its suite on the back-end technology of TheSpot, according to Peter Moore, Cortex's CEO. "All of the logic will be retained," he said.

"We worked hard from January to June getting [TheSpot] site up and running and these will be the base components for the new DJs site," Moore said. "We have a long way to go to add all that DJ wants, and we will continue to improve the functionality."Cortex teamed up with TheSpot earlier this year to migrate ToySpot from Microsoft ASP (Active Server Page) and SQL 7 to a sophisticated Java-based system. The new back end was based on BEA Web Logic and Sun Solaris, using Enterprise Java Beans and Java Server Page.

David Jones' online store will be a "worldwide standard, high-end solution with all the bells and whistles", claimed Moore. "What's impressed us is that [DJs] has really taken online' seriously."The current DJs Web site has the "look and feel" of the new online store, but the e-commerce functionality won't be available until after the Olympics, a spokesperson said.

Cortex will develop the online Web shopping platform and integrate it with DJs' legacy systems, including the store credit card.

Cortex's only reservation in partnering with a traditional company was the potential cultural problems. Cortex's management have had past poor experiences in "desperately political" corporate environments. "All startups like to work with [other startups] and take risks," Moore explained.

However, he relished the chance to align with a prestigious "older" company like David Jones. "We see it as an opportunity to prove ourselves to the old world," he said. "We're focused on getting the hardest, most challenging implementations into a company without the corporate baggage."Also, a Cortex spokesperson admitted negotiations on the contract price were bumpy. Cortex's asking price was much higher than the agreed $1 million, he said, declining to reveal the figure. He added that corporate companies seemed more concerned with pitching IT projects to investors from the financial sector, not to IT startups. 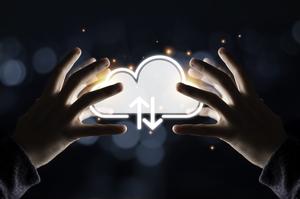