Dicker's vision has paid off. With hard work, gutsy determination, an entrepreneurial spirit, outspoken, no holds-barred character has been in the distribution game since 1978 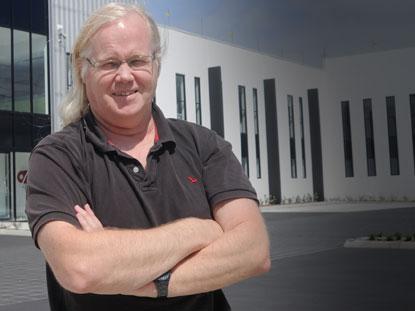 David Dicker is the first of three 2010 Hall of Fame inductees. The Hall of Fame recognises exceptional individuals who have contributed to the Australian IT industry over a significant period of time. Dicker was triumphant in winning the commendation of his peers to be recognised as a 2010 inductee. He spoke to JENNIFER O’BRIEN.

Despite a wildly successful career in the Australian distribution channel, David Dicker displays a tinge of sadness and regret as he laments his failed invention back in the '80s.

“I spent 10 years in the ‘80s trying to build my own computer in Australia and export it worldwide. And we’re not talking about a personal computer, we’re talking about a full-scale machine,” said Dicker, managing director and co-owner of Dicker Data.

“I designed the architecture of the hardware and the software, I wrote the operating system and I had engineers and programmers who did all the support work and we failed in that project. It was rubbish, but I made strategic errors in terms of the way I managed it, so it was basically my fault. Bitter is not the right word, but if we’d taken that approach to the US or even in Taiwan, I’m sure we would have succeeded. But I was hell-bent on doing it in Australia. In hindsight that was just a huge mistake.”

Indeed, this outspoken, no holds-barred character has been in the distribution game since 1978 when he set up shop after flying to the US to buy microcomputers from Vector Graphics, which he eventually won exclusive Australian distribution rights for.

The Sutherland Shire-bred character, who prefers a tracksuit to the typical casual business attire, had been working in his father’s business (making material for building timber roof trusses) when he watched the work being done by the consulting engineers using HP-97 programmable calculators – and figured he could do it better.

“I started to write programs and I had to relearn all the mathematics that I flunked out on in high school. Fortunately I’d only been out of high school for a few years and I still had the stupid text books. I managed it – God knows how. Anyway, I started writing the programs and after a short time it was obvious that it was going better with us doing it than the consulting engineers so we told them to stop.”

He soon realised the programmable calculators weren’t powerful enough so he started looking for microcomputers, which he found in the US thanks to Vector Graphics. He bought four computers, which he sold to customers of the roofing truss business, and had ambitions to sell 10 computers a month.

“Obviously, anybody could see there was going to be a market for these computers so we started to sell them and that’s how it all started.”

Flash-forward to today and now Dicker is pulling in revenues of $280 million in the last financial year. The company is set to list on the ASX this month, using the DDR name, and has recently moved into swish new $15 million warehouse and office premises in Kurnell, Sydney.

He has made a significant contribution to the distribution market, building his business up from scratch and today can boast that HP is 70 per cent of its thriving business.

Certainly, this long-haired chap doesn’t consider himself to be a small fish in the sea. Push his buttons on the subject matter and our newest Hall of Fame inductee gets hot under the collar when discussing the state of the distribution market, the invading sea of foreign multinationals and his place in the IT game.

“We compete pretty well against the other guys. Against Ingram on PSG and server, they are probably a bit better than we are. But I think it’s fair to say that we do compete against them. So from that standpoint, we don’t consider ourselves to be smaller – we are just smaller on the overall scheme of things because we don’t have 70-odd vendor lines.”

The foreign multinationals have always been a bugbear, he said.

The other low point is the fact he can’t get his hands on the IPG (Imaging and Printing Group) part of the HP business – it’s the only missing piece of the puzzle, Dicker said.

“To be honest, I get the feeling we might finally be in a position where it’s possible to get it. I think it’s insane we don’t have it when you look at our performance on PSG and server,” he said. “The fact we don’t have it just doesn’t make any logical sense. I don’t really see how anyone could argue against us having it.”

Meanwhile, an exciting subject matter to discuss is the move towards the cloud. Asked whether the push towards the cloud is good for a volume-based distributor, he said the company’s move to hatch a datacentre (a 5500sqm of land with 400-500 cabinets in Taren Point, Sydney) is his trump card.

“Our answer is obviously this datacentre thing,” he said. “We will be the only datacentre provider who’s got a very strong IT background. I could be wrong, but most of the other guys are real estate providers that just house your equipment.”

“We see a good opportunity here... We won’t just have a shed where people can put their equipment – we will also be able to supply the equipment and advise them on what they need and all that kind of stuff. I think that will give us an advantage over the other distributors who have nothing to do with the datacentre in terms of actually doing one. And if this cloud thing takes off we should be in a pretty strong position getting in on the ground floor.”

So what’s the secret to his success? Dicker, who can boast four houses to his name - one in Dubai, Northern Italy, New Zealand and Australia along with 15 sports cars, said it’s “not particularly complicated.”

“To be honest, it’s still the same basic methods – product knowledge is the key, doing what you say you are going to do is the key. I’ve never been a big fan of this whole value added thing. I mean it’s a mirage really. Look, we’re a volume distributor, that’s what we do. Someone has got to do it, and we do it better than anyone else, in my opinion.”

“Business is about having an edge, that’s all it’s about. It’s just doing it better than the other guy.”

And did he always envision a life in IT? Certainly not, he said.

“I wasn’t one of those kids who was some kind of child entrepreneur. I can remember having a job delivering flyers into mailboxes and I was 10 or 11-years old, and thinking this was a lot of work for just about no money.”

Sailing got him out of his funk.

“I was 14. I was drifting around and my parents were the sort of ones that were always concerned about their kids turning out to be hopeless losers, so they made me take up sailing. I didn’t even want to do it. They bought me this boat for Christmas when I was 14. And then that took over my whole life because it was the first thing that I ever got interested in that really captured my imagination.”

At least in business, compared to sport, Dicker can boast being at the top of his game and has earned the right to look back on a highly successful career in the Australian distribution channel.

And Dicker's vision has paid off. With hard work, gutsy determination and an entrepreneurial spirit, he is a true Australian success story that today leads a team of 60 employees and is about to embark on the next part of the journey: the listing on the ASX and the move into his state-of-the-art facility in Kurnell.