"Compatibility issues have always detracted from the Windows upgrade experience, whether corporate or consumer." 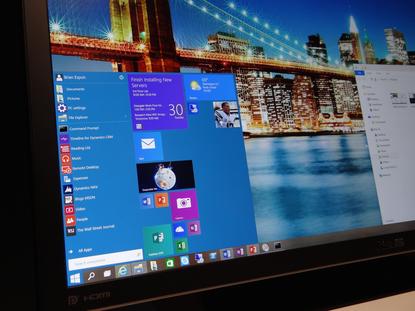 Microsoft has announced that Windows 10 will be available on Wednesday, July 29, to those who want it.

To alert users to this fact, Microsoft has pushed out an app that encourages the user to “reserve” their free upgrade to Windows 10.

With 30 per cent of organisations now operating formal BYOD programs, and many others adopting a “best efforts” approach, Richard Edwards, research analyst, Ovum, believes IT departments must prepare for the imminent arrival of this new operating system.

But for Edwards, compatibility issues have always detracted from the Windows upgrade experience, whether corporate or consumer.

“Microsoft has lit up the “Get Windows 10” app on consumer and business PCs that are not attached to a corporate domain,” Edwards observes.

“The app manifests itself as a small, inconspicuous Windows icon in the task bar.

Microsoft claims that over 1.5 million “Windows Insiders” have installed the preview version of the operating system, and that it has fixed more than 1,300 reported bugs.

However, while the Windows 10 upgrade is designed to work with current Windows PCs and applications, Edwards believes compatibility issues will always be part of the Windows upgrade story, particularly where more specialised features and hardware enhancements are present.

“One-third of organisations now operate formal BYOD programs, so corporate IT departments are unlikely to escape the Windows 10 melee,” he adds. “As always, Ovum’s advice is “be prepared”.

“Windows 10 will ship with a new web browser, so HR departments might want to check the status of the employee portal, including time recording systems, pay and benefits sites, and so on. Forewarned is forearmed.”

Historically, a new version of Windows has provided a welcome boost to the PC industry, but as Edwards points out, there is no certainty this time around.

“Acer, ASUS, and Lenovo used the Windows 10 announcement to announce new PC and Windows tablet designs that will ship with the new operating system, while other PC makers launched clearance sales of their Windows 8.1 PCs,” Edwards adds.

“So, those looking to buy a new PC, including BYODers, still have plenty of options and choices available.”