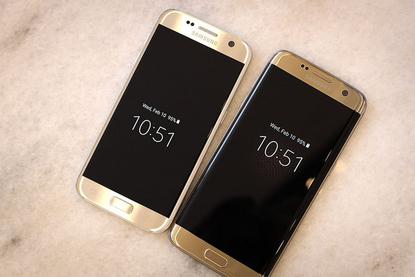 If CES is the party deck of the mobile technology world, Mobile World Congress is the engine room. It's where the world's carriers meet infrastructure vendors and telecom ministers, and Very Serious Business takes place. Handset makers from the top tier to the bargain basement all clamor for attention and, with any luck, something interesting will turn up.

This year, three major vendors unveiled flagship phones, each addressing what the companies seem to think are very different customer needs. I was able to do quick tryouts of the LG G5, the Samsung Galaxy 7 and the HP Elite x3 -- revealing three sophisticated companies with amazingly different views of the world.

It's important to note: These aren't full product reviews (which we plan to have for you closer to when the products are released). This roundup is based on quick hands-on impressions with information based on pre-briefings and filled in by product demonstrators who may not have been fully informed. But even given that, you can tell a lot from a little time spent with a phone in your hand.

Maybe it's Apple fault, because it was the first company to seal in a smartphone's battery. Within a couple of years, everyone else did, too (Samsung being the last major holdout). This may have delighted the companies that make portable battery chargers, but not everyone was thrilled. If fact, there's been a steady drumbeat of customers who rail against non-replaceable batteries.

Those people will be thrilled with the LG G5. There are other good things about it, but the one thing that stands out is that the G5 has a replaceable battery. And it doesn't use a door on the back of the phone or force you to pry the whole back off. Instead, there's a clever little button on the lower right side of the phone; press it, and the bottom of the phone pops off and the battery pulls out.

But wait, there's more -- because that phone bottom can be replaced by modules with additional functions. There's a Hi-Fi module with sound (presumably DACs) from Bang & Olufsen, and another with a bigger grip and shutter trigger for the phone's camera, so it acts like a point-and-shoot camera. More, LG promises, will be forthcoming.

[ Further reading: Here's where Microsoft is going with mobile ]

The downside? The G5 is in no way waterproof. Other manufacturers of phones (and many other consumer electronic devices) now make a big deal out of their IP rating, which indicates how impervious their gadget is to dust and water. I asked an LG rep for the G5's IP rating, and he said, "It doesn't have an IP rating." You want a replaceable battery? Fine: Now you have to keep it dry.

The G5 also halts the trend toward larger flagship phones. It's a comparatively small 5.3 in. diagonal, and its quad-density IPS display looked perfectly fine under controlled conditions. It runs Android 6.0 (Marshmallow), but with some changes that are sure to be controversial.

There is no app launcher, for instance: All apps appear on a home screen that gains pages as you accumulate them, just like (for the sake of argument) in Apple's iPhone. In a choice that won't anger as many people, the Settings screen is tabbed, making it easier to find the function you want, rather than scrolling through an endless list. (Although if you like scrolling through endless lists, you can see it that way, too.)

The build is solid aluminum, with a thin bead of metal running around the back -- presumably, the antenna. Power is controlled by the fingerprint reader on the back; pressing the reader depresses it slightly and turns the phone on and off. I found it to be quite natural and effective.

LG has done some work with the camera, too. Rather than one lens on the back, there are two: a 16-megapixel camera with a 75-degree range and a wide-angle 8-megapixel camera. The claim is that the G5 can take wider pictures than any other phone.

Another feature LG makes a big deal of is an "always-on" screen. It's not as eerie as it may sound: Turn the phone off or remove the battery and the screen does, in fact, turn off. But when the phone is sleeping, it's always displaying the time and a notification you can set. LG says it pulls just 0.8% of the phone's power per hour, and what the hey -- you can always replace the battery, right?

As ever, Samsung's unveiling of its latest Galaxy line was long on glitz, including VR demos for each of the 4,000 or so attendees, and a surprise appearance by Facebook CEO Mark Zuckerberg. For all of that, the new Galaxy S7 and Galaxy S7 Edge were the focus of the evening and worth the attention.

The S7's screen is 5.1 in. diagonal and the S7 Edge's is 5.7 in.; both with a resolution of 2560 x 1440 pixels. As with last year's Galaxy S6 Edge, the S7 Edge's screen is rounded along both long edges; new for this year is that more screen space is given to the rounding. The camera bump on the back is smaller, but Samsung says the phone is faster to focus and is better in low light conditions because of an f/1.7 camera lens aperture and larger dual pixels. I didn't have a chance to test that.

One of the complaints about the Galaxy S6 was its loss of a micro SD tray; Samsung listened to its users and has restored that feature. And it managed to seal the unit against water (giving it an IP68 rating) without putting seals over the ports. That means the Galaxy S7 series can withstand immersion in about 10 feet of water.

The battery has been improved: 3000mAh for the S7, 3600mAh for the S7 Edge. And Samsung stuck with a micro-USB port for powering the unit rather than going with the newer USB Type-C.

The phones have a nice feel and look great. Samsung has played with Android around the Settings app, but it's still clearly Version 6.0 (Marshmallow) and probably won't result in any serious complaints from Android purists. It's a little tricky to pull apps over from the side of the Edge -- swiping from the edge of the screen brings up customizable series of quick-access widgets. It was unclear from a quick tryout whether that's something that a little practice could fix.

Of the three phones profiled here, these are the only ones with a firm pre-order and on-sale date: Pre-orders start Feb. 23, with delivery March 11. And if you pre-order in the U.S. and U.K., you get a free Gear VR virtual reality headset, which typically costs about $100.

As of press time, the only carrier to announce pricing is Sprint, which will be charging $25.99/month for the S7 and $30.50/month for the S7 Edge over 24 months on its "Galaxy Forever" plan (which allows an upgrade after 12 monthly payments). According to a Samsung representative, there are no current plans for unlocked models.

When your best customers are enterprises and IT people, and you listen to your customers, you might well come up with something like the HP Elite x3.

Wait: HP is producing smartphones? Yes, and the company sees it as a way to give back some control over devices to IT departments, control that they long ago ceded in the BYOD revolution.

The first thing that hit me: It's a Windows Phone. This phone is aimed at IT departments that are in charge of securing assets, managing budgets and training people. HP execs see the Elite x3 as a possible PC replacement for light-duty tasks. Using Window's Continuum feature, the phone can be docked to a monitor and keyboard, and presto! A PC running Windows.

The device is big -- it has a 6-in. diagonal screen, and although it's remarkably slim, it has significant heft. A lot of that weight probably comes from the 4150mAh battery (that compared to, say, the Galaxy S7 Edge's 3600mAh battery, is pretty substantial). It charges with a USB-C cable and can take dual SIMs.

Besides being big, the phone is built. It claims an IP67 rating, good enough to withstand all but the most determined and prolonged dunking, and Samsung reps claim the ability to withstand a four-foot drop without screen breakage. (This was left untested by request.) Interesting for a business-class phone -- maybe for listening during conference calls -- the Elite x3 sports a pair of forward-firing Bang & Olufsen speakers. They sounded nice, even in a very busy demo room.

HP execs wobbled a bit when discussing distribution plans. They want this to be an enterprise phone, sold solely through direct sales and the VAR channel. But talk to them a little more, and they start talking about the prosumer market, the Windows fanatic market and the SMB market, and there was some speculation about Microsoft stores -- and it starts to sound as though they wouldn't see it as the worst thing in the world if the Elite x3 found its way into some pockets that weren't necessarily corporate.

HP hopes to ship the Elite x3 in the second quarter. Representatives wouldn't discuss price, which makes sense given the nature of their primary distribution channels. My guess is that this will be at the top of the flagship market: At about $700.

When it was new, Windows Phone had a ton of great interface innovations, many of which have been adopted over the years (as good ideas are) by Android and iOS. But despite its lack of push in the consumer market, it remains an interesting and useful operating system.

It's far too early to make an educated guess about the fate of the Elite x3, but the design choices all seem to be defensible at first glance. Whether the target market will embrace something so different is another question altogether.

The Samsung Galaxy S7 and Galaxy S7 Edge are the most ambitious. The company is both aiming at the general smartphone market as it's evolved and hoping to employ these phones as a wedge into new uses like virtual reality.

The LG G5 is aggressively consumer-oriented; its replaceable battery and function modules at the expense of ruggedness could well capture a raft of casual users.

To call HP's Elite x3 an oddball is natural but not entirely fair. In an age where most vendors are trying for something that looks and works only marginally differently from everyone else, to make radically different choices in operating system and target market is surprising -- but not necessarily wrong. At first glance, the phone works pretty much as advertised. Will enterprises embrace it? It's far too early to tell, but the goods themselves certainly look credible.

We'll let you know when we get to put them through their paces in a couple of months.