Attorney General and Immigration Minister head to Canada for talks 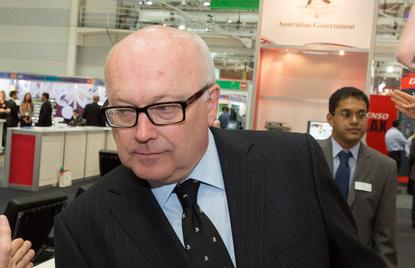 Australia plans to address the "involvement of industry in thwarting the encryption of terrorist messaging" at the Five Eyes conference in Canada, according to the Attorney General George Brandis.

Brandis, and Minister for Immigration and Border Protection,Peter Dutton, travel to Ottawa on Monday 26 July for meetings with their Five-Eyes counterparts.

The two will attend the Five Country Ministerial (FCM) on National Security. Senator Brandis will also attend the Quintet meeting of Attorneys-General.

The Five Eyes is the result of an intelligence sharing agreement between Australia, New Zealand, Canada the UK and US. The countries share all intelligence information with each other in an open format but Brandis said the issue of encryption must be addressed.

"As the Prime Minister said yesterday, the use by terrorists of cyberspace is an issue of critical concern to intelligence and law enforcement agencies. Australia will lead the discussion of ways to address this issue; in particular the involvement of industry in thwarting the encryption of terrorist messaging," he said.

"We all share the global challenges of terrorism, foreign fighters and protecting our borders. The next two days will provide us with an opportunity to share our experiences and learn from our partners in the United Kingdom, Canada, New Zealand and the United States."

“As Australia’s priority issue, I will raise the need to address ongoing challenges posed by terrorists and criminals using encryption. These discussions will focus on the need to cooperate with service providers to ensure reasonable assistance is provided to law enforcement and security agencies.”

For his part, Dutton will engage with other Five Eyes countries on issues relating to border security.

“The countries meeting in Ottawa are among the most important partners for Australia in ensuring the integrity of our borders. This was demonstrated in part by cooperation in the screening of Australia’s 12,000 refugees from Syria and Iraq,” he said.

The Government said the FCM meeting was an opportunity for the minister to discuss Australia’s strong border protection policies, including the proposed strengthening of citizenship arrangements which will bring us into line with partner countries.

“I look forward to discussing with my counterparts the growing challenges we all face from increasing cross-border movements of people and goods and the importance of strengthening our intelligence exchanges and operational collaboration,”Dutton said.

“Cooperation with our Five Eyes partners is critical to keeping Australians safe and we look forward to these important meetings.”