Some are forecasting that the cryptocurrency could hit US$20,000 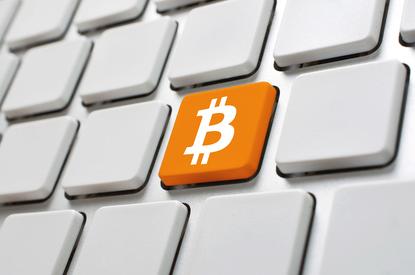 Bitcoin rocketed to a lifetime high just shy of US$16,000 on Thursday after climbing some 60 per cent over one week, intensifying the debate about whether the cryptocurrency is in a bubble about to burst.

The largest US cryptocurrency exchange struggled to keep up with record traffic as the price surged, with an upcoming launch of the first bitcoin futures contract further fuelling investor interest.

Proponents say bitcoin is a good medium of exchange and a way to store value, much like a precious metal. They also argue it is preferable to traditional currencies because it is not subject to central bank manipulation.

The supply of bitcoin will eventually be capped at 21 million, and some 16.7 million have already been released.

But critics say that the price run-up is a bubble that has been driven mostly by speculation, leaving bitcoin vulnerable to a sharp reversal. JPMorgan Chase & Co CEO, Jamie Dimon, famously called bitcoin a fraud in September.

"Bitcoin remains a major gamble as it is very much an asset that remains in uncharted waters, we've simply not experienced this before," said Nigel Green, founder and chief executive of deVere Group.

"Also, an asset that goes almost vertically up should typically raise alarm bells for investors," he added.

The world's biggest cryptocurrency has surged fifteen-fold in value so far this year.

The latest move brought its so-called market cap, its price multiplied by the number of bitcoins in circulation, to nearly US$280 billion, according to Coinmarketcap, a trade website. By comparison, the market value of Wal-Mart Stores is around US$288 billion.

Analysts said the launch slated for this weekend of bitcoin futures by Cboe Global Markets’ Cboe Futures Exchange, one of the world's biggest derivatives exchanges, was helping drive up the price on expectations it would draw more investors to the market.

The CME Group will launch bitcoin futures one week later, while Nasdaq plans to get into the mix next year.

It is not clear to what extent big US banks will participate in the new bitcoin-related activity.

Goldman Sachs Group will clear bitcoin futures for certain clients when they go live, a spokeswoman said on Thursday.

The bank is "evaluating the specifications and risk attributes for the bitcoin futures contracts as part of our standard due diligence process," spokeswoman Tiffany Galvin said.

Coinbase, the largest US platform for buying and selling cryptocurrencies, said on Thursday on Twitter that it had experienced an outage due to record traffic. The venue was last up and running.

Some investors said they still see scope for bitcoin to soar even higher.

"It will hit potentially US$20,000 because so much capital is coming in and it's the most liquid secure coin out there," said David Drake, founder and chairman of DLJ Capital, a family office in New York.

Other trading venues showed different prices for bitcoin, which trades in more than 100 cryptocurrency exchanges that are not accountable to any central authority. For instance, at institutional trading platform GDAX, bitcoin topped US$19,000, while it hit above US$16,000 at itBit.

Those price discrepancies could add another level of speculation by introducing the prospect of arbitrage trades between the markets.

Some warned that the launch of bitcoin futures, which will allow investors to take speculative short positions to bet against the cryptoccurrency, as well as long positions, could spark further volatility.

And while Cboe, CME and Nasdaq offer strictly policed trading environments, the underlying bitcoin market is riddled with exchanges lacking even basic oversight.

The Futures Industry Association, representing some of the world's largest brokers, sent a letter on Thursday to the US Commodity Futures Trading Commission saying that more safeguards are needed to protect against bitcoin's high volatility and the risk of manipulation in the spot market.

"Aggressive traders, such as hedge funds and algorithm-driven funds, (will be able) to use this futures market to enter bitcoin trading with high levels of liquidity for aggressive short-selling and knock the prices really low," said Think Markets analyst Naeem Aslam.

"Players now have an incentive to be on the short side and make profits hedging against the upside."

Concerns about cybersecurity could also take the shine off of bitcoin.

Slovenian cryptocurrency mining marketplace NiceHash, which matches people looking to sell processing time on computers in exchange for bitcoin, said on Thursday it had lost about $64 million worth of bitcoin in a hack of its payment system.

Bitcoin slumped in 2014 when MtGox, then the world's biggest bitcoin exchange, collapsed after saying it had been hacked and had 650,000 bitcoins stolen.

The value of all cryptocurrencies now stands at nearly US$430 billion, according to Coinmarketcap.

Bitcoin has more than tripled in price since the start of October, putting it on track for its best quarter since the end of 2013, when it surged above US$1,000 for the first time.

(Reporting by Gertrude Chavez-Dreyfuss in New York and Jemima Kelly in London; Editing by Abhinav Ramnarayan and Meredith Mazzilli)