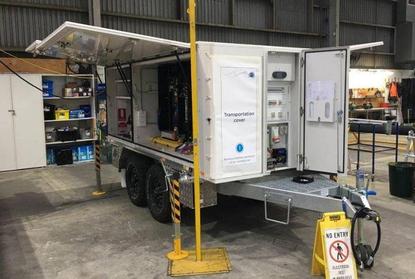 NBN Co says it has deployed on of its ‘Network on Wheels’ trailers in an effort to keep online more than 3000 broadband services in the Mid North Coast.

The company said it was working to mitigate the impact of damage to a telecommunications exchange serving the Diamond Beach region, which houses NBN infrastructure.

NBN Co said that as of 18 November, all of the NSW services affected by the bushfires had been restored.

“While our field technicians have temporarily restored services at the Diamond Beach exchange, the damage to the site has left NBN infrastructure vulnerable,” said Ryan Williams, the head of NBN Local for NSW and Queensland.

NBN Co launched NBN Local in 2017 as part of an effort to engage regional and remote communities.

“Our crews configured our Network on Wheels equipment to duplicate the technical requirements of the Diamond Beach site, before it was transported to the region,” Williams said in a statement.

“While services are currently stable, we will be shifting services from the existing exchange over to the Network on Wheels overnight to minimise disruptions and expect this will be completed by early Thursday morning, pending conditions. We will then monitor services on the temporary infrastructure until such time they can be transferred back to the new exchange.”

NBN Co last year revealed details of its four Network on Wheels trailers that can be used to stand in for exchange equipment or a damaged fixed wireless tower.

It also has a fleet of ‘Road Muster’ trucks equipped with satellite dishes and satellite fly-away kits, both of which can provide access to its Sky Muster service.