ARN profiles its latest Hall of Fame inductee about his 18 years in IT with Express Data, Microsoft and Dimension Data. 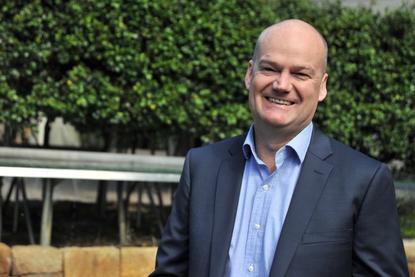 ARN Hall of Famer and Microsoft's director of small and midmarket solutions and partners, David Gage

David Gage always felt like the black sheep of his family. His father was a professor of medicine and his mother a physiotherapist. As the youngest of four by six years (his siblings include a NASA aeronautical engineer, a doctor and a lawyer), he never really felt like he fitted the mould.

Sports mad from a young age, Gage’s early childhood dream was to be a sports journalist. The closest he got was doing some work experience at ABC editing sports highlights. After looking at degrees at Mitchell College (now Charles Sturt Uni) in Bathurst, Gage lost interest and by the end of high school was no clearer about what he wanted to do as a career, so he entered university looking to buy some time while he made up his mind.

During this time, David’s greatest influence was his mother. After his parents separated, he lived with her as she continued to run her physiotheraphy business working long hours, including a one hour each way commute. Gage admired her ‘always on’ hard work ethic – something he says has driven him toward where he ended up today.

“I’ve probably always felt like I’ve had a bit to prove to my family,” he said.

“It’s not like they actually view me as a black sheep, but I always thought that I’d taken a very different direction from their expectations.

“They’ve said they are incredibly proud of what I’ve done. But it was always more a personal motivator. It was my view of the world.”

Those afternoons waiting for mum to come home involved the Gage siblings and neighbourhood friends playing every sport they could think of, including cricket, rugby, soccer and golf. It wasn’t until he was at the University of Sydney open day, when he stood around a keg of beer with the university Aussie Rules team that he got into his true sporting passion. Even after he finished university, he continued playing for the Old Boys team for 16 years – retiring only at 35 when his body started to slow down.

The importance of all this sport is not something lost on David – it’s part of the idealogy, the mentality, the philosophy he brings to his approach to business.

“I love bringing teams together,” he says.

“Recognising the strengths of individuals, what motivates individuals. It’s different for everyone, and you need that level of understanding to bring that collective together.”

“At my role within Microsoft, I am not a super technical person. Almost everybody within this organisation has a deeper understanding of products. Yes, I need to develop my skills more in that regard, but I see the core part of my role being around people and culture. Building a stronger team. Looking at all the roles I’ve undertaken across the years, I like to think that when I’ve left a team, it has been in stronger shape than when I started.

“People and culture is everything for me.”

Much of this team culture was further developed under his mentors, fellow ARN Hall of Fame inductees Jon Shein, Ross Cochrane and Steve Nola, who pushed a ‘balanced scorecard’ system, something Gage took up and ran with.

Focus on your people, your culture, and provide them with the right tools to do the job, such as systems and processes, then you’ll provide an exceptional customer experience. Financial growth, or profit, is the output, he says.

“Get those pieces right, and then you’ve got yourself a successful business. So many businesses I see focus on the financials. If you cut your costs and your business to the bone, and treat your people poorly – then you aren’t going to attract the right kind of talent. That’s completely the wrong approach,” Gage says.

“Most of all, it’s good fun providing an exceptional customer experience.”

Although most famous for his roles at Express Online, Express Data and Dimension Data Learning Systems (DDLS), Gage actually started out as a delivery truck driver at Butterfields Specialty Foods after university. He impressed in the wagon, and so was offered a sales role – and so began his rise.

The company was, at that time looking at commercialising King Island products, moving from the delis and high end restaurants to selling FMCG, such as to Coles and Woolworths. He was involved with a small team overseeing the project.

“It was an amazing opportunity for a 21-year-old to make those connections. I’m still amazed to this day that I was given a management position, running a team of sales reps. My role was to deal with the buyers at Woolworths and Coles – against seriously seasoned negotiators. I learned a lot out of that.”

By the time he was 24, Gage was burned out and took a gap year travelling the world, working in ski resorts and travelling Europe and Asia, returning to Australia in 1996 penniless. It was at this point he was offered a chance to work in IT, an area he had always had an interest in.

His father, ever the scientist, had always brought home computers and mainframes for the kids to fiddle with, through his job at the University of Sydney.

“1996 was when IT was starting to explode, so I made the decision to take a change in direction. The first job I seriously applied for was with 3M, in their data storage business, and went into sales, as an account manager role.”

Three years later after learning all he could, he met Jon Shein at an industry function, hit it off, and in 1999 joined Express Data. Business boomed in the pre-Y2k, pre-dot.com crash days – an era where booze ran more freely, and vendors had more money and time to spend on developing distie and reseller partnerships. After a short stint as branch manager in Brisbane, he made a fateful pitch to Ross Cochrane that would change everything.

He was shifted back to Sydney to work on this new secret project for ED, locked away for months in a private office. The project was Express Online, one of the first channel online marketplaces. He considers it to be one of his career highlights.

“Express Online was pretty special. There were a lot of doubters out there, a lot of people that thought it wouldn’t work. But it turned into a very, very good business.”

It started off with just Gage and Allison Macquarie, a long-time friend and collaborator, who eventually took over Express Online when he went to Dimension Data Learning Systems for a change of scene. DDLS was another completely new marketplace to engage in. More of a systems integrator, focused on Microsoft Licensing (which would obviously come into use later), he was later promoted to General Manager, where he learned more about training, education and professional services – developing him into more of an ‘all-rounder’.

Gage was then offered the CEO role at Express Data in 2011, which he said was ‘like coming home’.

“A lot of my old friends and work colleagues were still there, so that was fantastic,” he says.

“Distribution is a different environment. You either love it or hate it. I definitely love it. In distribution you’re kind of in the centre of the industry – vendors on one side, partners on the other. The only thing you do miss is that direct interaction with the customer.”

This became another channel game changer, as Gage personally oversaw the sale of Express Data to Dicker Data, which concluded earlier this year.

“I had full foreknowledge that that was probably going to happen during my tenure. And that it was going to be part of my responsibility as CEO.

“The whole thing actually kicked off as a result of discussion I had with David Dicker at the ARN Judges’ Lunch last year.”

Once he put the sale in action, he then made the move to Microsoft. He was offered the job personally by ANZ managing director, Pip Marlow, with whom he had a long-standing relationship. The timing was perfect.

“There was pretty close alignment in terms of our view of business, and people and culture. She’s an old channel hand too,” Gage says.

Over all those years, there certainly have been a lot of changes in the channel. How does today compare to the 1990s?

“I do think the pace of change is accelerating. There is famous saying, ‘those who fail to learn from history are doomed to repeat it.’ I think that applies to the channel right now. If I look at all the businesses that have gone under over the years, it’s largely a function of their inability to respond to market shifts. It happened when we moved from box products to licensing. It’s happening now with the transition to the Cloud. It will happen again in the future. You can’t ever be complacent.”

“Focus on your people. Focus on teamwork. That sounds simplistic. It sounds a bit cliché. But I’ve always tried to surround myself with the best people, and get them working well together. If I’m the smartest guy in the room, then we’ve got big problems.”