In an interview in arch design magazine Wallpaper, former Apple chief design officer Jonny Ive reminisces on advice given to him by company founder Steve Jobs. He also expresses his anger that much design today doesn't work as he and Jobs did at Apple, and is all the poorer for it — going so far to claim that many products do not deserve to exist.

Ive is described in the interview as unfailingly polite, solicitous and considerate but often describes his design process as furious and angry, particularly in relation to design's response to climate change on which he has been working with Prince Charles, the Prince of Wales.

Ive left Apple in 2019 to form his own design consulting firm and recently cut all ties with Apple. However, he still remembers the one word Jobs told him should go into everything he designs: Care.

As well as being a Knight Commander of the Order of the British Empire (KBE) for the past decade, Ive is a Royal Designer for Industry, an Honorary Fellow of the Royal Academy of Engineering.

His most recent design isn't quite on the scale of the iPhone: the seal for the Prince of Wales's Terra Carta campaign, which boasts the motto For Nature, People and Planet. The seal was designed by Ive using a specially drawn Baskerville-derived serif font that he reserves for his personal projects. 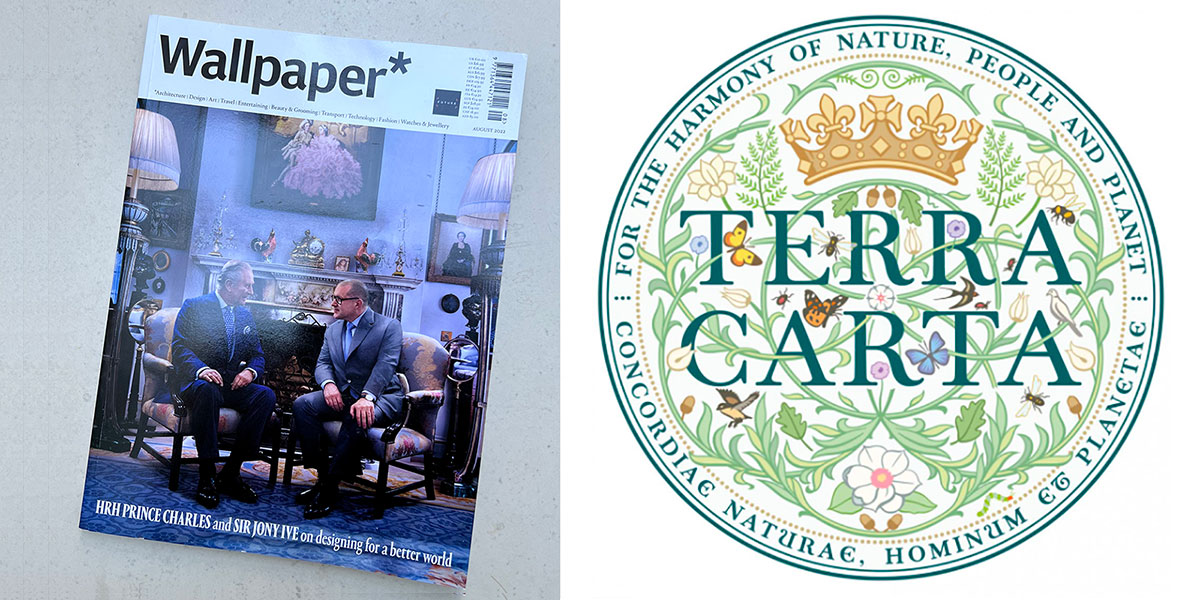 Based on the famous royal charter of rights the Magna Carta, which was signed under some duress by Prince Charles's distant relative King John in 1215, Terra Carta is a mandate that puts sustainability at the heart of the private sector. It is meant as guide for business to avert climate catastrophe in the belief that capitalism and enlightened self-interest are compatible with saving the planet.

While all this royal talk sounds archaic, Wallpaper reports that, despite its Latin name, Terra Carta is written in the language of modern management theory, and looks at areas of green investment, such as electric flight, carbon-neutral construction and nuclear fission.

Ive is helping Prince Charles advise the four winners of the prince's £200,000 ($240,000) Sustainable Markets Initiative to take their projects to market. The two worked together after Ive suggested the forming of a design lab at the Royal College of Art (RCA) of which he is chancellor.

‘Care' is key to design

For all of his accolades, Ive is filled with anger when discussing design. I am angry that most of what is made seems so thoughtless. So many products do not deserve to exist. The minimum that they should do to justify themselves and consume all that material is that their designers should care about them.

We have lost sight of how recent industrialization is. Unlike architecture, design is still a new profession. It is developed by putting a design office on top of a manufacturing plant, then discovered authorship, and is still trying to find how to make sense of the equation.

When you design, you must have a thorough understanding of materials, otherwise you get a fractured development of form. … You often hear people apologising that things are not made the way that they wanted. I understand that excuse, but at Apple I spent months at manufacturing sites, and my apology would have had no currency.

He still remembers the time he spent discussing design with Jobs and how one word defined everything he helped make. Steve told me, ‘When you make something with care, even though you don't know who the people using it will be, they will sense it. Care is a way to express our love for the species.'

And Ive still uses that advice today. If it's designed and made with care, a mass-produced object can have the resonances of a batch production. It comes down to motivation and the sacrifices you make for the exercise.

ARN has celebrated gender diversity and recognised female excellence across the Australian tech channel since first launching WIICTA in 2012, acknowledging the achievements of a talented group of female front runners who have become influential figures across the local industry.

Embracing services will be key to delivering customer-centric innovation across APAC: Juniper Networks